At the closing of summer 2017, a little piece of Hollywood came to the Island of Vis.

Earlier that year scouts came to the island to see if the island was suitable to shoot scenes of ‘Mamma Mia! Here we Go Again’. The long expected sequel of Mamma Mia with in the leading role Meryl Streep. Although Vis had to occur as the Greek island of Kalokairi, the people of Vis were extremely happy to host this big event with many famous actors.

First members of the crew arrived on Vis and started to build sets under strict confidentiality in August. Only by boat and from a good distance you could see the exact replica of the little wharf used in Mamma Mia ten years ago. Early September the movie brought approximately 700 people to the island. Including the leading stars Meryl Streep, Pearce Brosnan, Amanda Seyfried and Colin Firth. The sequel of Mamma Mia was the largest film production in the history of the country.

Because the island has a little less than 4000 inhabitants, many stars and crew members stayed in private rental homes. We were honored to host the the camera director and his crew at The Green- and The Upper House. 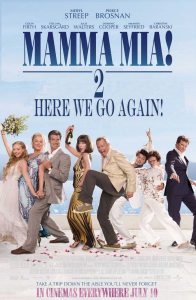 Just before Christmas 2017, Universal Pictures released the first trailers of the movie, which will air on July 20th in cinemas worldwide. How fantastic to watch the movie at the open air cinema in town while you spend your holiday on the Island of Vis.